Harvesting both Brazil nuts and timber

A new evaluation of CIFOR research on Brazil nut production documents the research team’s experience in using scientific research to influence the development of forest policy in Peru. The country’s guidelines for managing Brazil nut concessions highlight study results that indicate how much timber can be cut without affecting nut yields, making it easier for communities to conserve local forests – and their livelihoods.

Brazil nuts, a wild forest food from the Amazonian forests of Peru, Bolivia and Brazil, generate tens of millions of US dollars on the international market. Harvesters collect, shell and process them by hand during the rainy season, often fending off snakes, insects and illegal loggers in the process.

The massive Bertholletia excelsa tree that bears the nuts grows alongside dozens of timber-rich species, and many concession owners use selective logging to supplement their income during the dry season. In 2004, Peru authorized the logging of up to 5 cubic meters per hectare of timber trees in Brazil nut concessions. But this number wasn’t based on data, because the trade-offs between logging and nut yields had never been studied.

The fact that Brazil nut regional management regulations partially incorporate and reflect scientific knowledge on multi-use forest management that was produced by the Brazil Nut Project’s research indicates an important step along the policy pathway.”

authors of an evaluation of CIFOR's research project on Brazil nuts

Recognizing a window of opportunity to influence the development of new Brazil nut management guidelines, CIFOR scientists launched a study to determine the amount of timber that can be removed without affecting Brazil nut yields. They found that logging up to two trees per hectare, but no more, was compatible with Brazil nut production.
This new limit was included in the official Brazil nut management guidelines, published in January 2016. But some concession owners saw the new guidelines as too restrictive, the government released an updated version in July of that year with the 5 m3/ha limit reinstated – and CIFOR’s findings moved to a footnote.

The evaluation found the project to be successful in reaching its aim of “crossing the science-policy interface”, while improving knowledge of Brazil nut ecology among concession owners and the project’s students, and stimulating debate about the sustainable management of Brazil nut groves.

But in light of the pushback that led to the guidelines being weakened, the authors also highlighted lessons for scientists conducting similar research. Especially in contexts such as Peru, where there was a shift toward decentralizing policy processes, it is key to engage regional stakeholders throughout all stages of a project so that everyone has a clear understanding of the findings.

Buying selenium-rich Brazil nuts can help save parts of the Amazon forest – and local livelihoods. Since its trees need healthy ecosystems to produce enough nuts for export, the Brazil nut, which is the only internationally traded nut that comes from tropical primary forest, can in effect promote forest conservation.

“Gathering the fruit is hard, splitting them is hard, and shelling the nuts is back-breaking,” said Miguel Zamalloya, president of RONAP, Peru’s Brazil nut producers’ organization.  Felicitas Ramirez Surco, a castañera in Alegría, Madre de Dios, explained the challenges. “It’s chaos taking care of this forest, it worries me a lot. It would be good if the world knew how we live here and the problems we’re having.” But she also spoke of the calm she finds in the forest. “This is the way I want to live!”

From the archives: Timber vs. Brazil nut: The Amazon’s harvest dilemma

Crossing the science-policy interface: Lessons from a research project on Brazil nut management in Peru 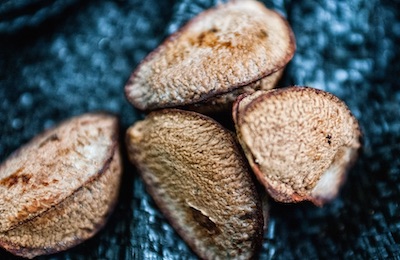 Nut Production in Bertholletia excelsa across a Logged Forest Mosaic: Implications for Multiple Forest Use