Recent research in Southern Ethiopia found that agricultural areas with the highest tree cover also experienced the most productivity in crop, feed and fuel – Photo by Mokhamad Edliadi/CIFOR

For over a decade, CIFOR scientists in Ethiopia have been working to inform and influence the government so that forestry legislation is well designed to prevent and reverse deforestation and forest degradation. Now they have cause for celebration – a new forest law, which finally accounts for the reality of forests – how they are used are a resource by communities, and how communities can be a resource for their protection.

The 2018 National Forest Law, which came into action in January, clearly recognizes the rights of communities and acknowledges their role in managing natural forests and establishing plantations, without unduly compromising ecological services or biodiversity.

“This is a big shift from previous legislation”, says Habtemariam Kassa, Team Leader of Forests and Human Well-being Research at CIFOR, who supported the Ministry’s efforts to revise the law. Previously, local communities had scant opportunity to participate in forest management, with recent reforestation efforts relying on galvanizing community support through cash for work programs, rather than socio-economic incentives. CIFOR scientists’ efforts to influence the 2007 forest law to consider this were unsuccessful; restored forest land was treated as state property, so even if communities spent decades restoring forests, land could be reallocated elsewhere, leaving them little motivated to invest.

Ethiopia’s 2018 National Forest Law is a really progressive law, and if implemented properly it is going to make a big difference.”

State Minister of the Forestry Sector

Things began to change when Ethiopia committed to restoring 22 million hectares of degraded lands and forests by 2030, under the 2011 Bonn Challenge and 2014 New York Climate Summit’s goal of restoring 350 million of hectares worldwide by 2030. Big commitments require big changes, and in 2013, the newly-established Ministry of Environment and Forests was more open to listen, as CIFOR and other researchers pushed for it to consider how a different approach could bring economic benefits and help the country attain its national and international restoration commitments. The law was revised according to their technical feedback, with three key changes: recognition of how participatory forest management can enhance communities’ role in managing forests; incentives for private forest developers; and severe penalties on those who expand farming into forests; tamper with forest boundaries; or set fire, harm endangered species, settle, hunt or graze animals in any forest.

As well as non-timber forest products, local communities can now harvest timber to agreed levels to make forest restoration worthwhile. Maximizing socio-economic benefits will help meet the state’s ambitious targets in a mutually beneficial way, and both Kassa and Ato Kebede Yimam, State Minister of the Forestry Sector, are hopeful that rural communities and forests will soon experience the benefits of the new law’s possibilities. “Ethiopia’s 2018 National Forest Law is a really progressive law, and if implemented properly it is going to make a big difference” says Minister Yimam. Now it must be translated into concrete action. “The next step is to support the government to put in place appropriate structures, redefine the roles of experts, and build their capacity to actualize the rights of communities,” concludes Kassa.

Ethiopia’s new forestry law: A win for landscapes and livelihoods? 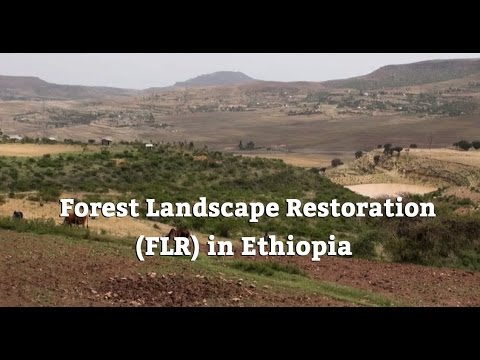 Previous
Letter from the DG
Next
Harvesting both Brazil nuts and...