Blended finance, gender in REDD+, and a more holistic approach

CIFOR has long been recognized as a top source of robust evidence, clear analysis and practical tools for policy makers and practitioners working on climate change mitigation and adaptation. In 2018, CIFOR was once again listed in the ranks of leading climate change think tanks, and its scientists continued to fill the urgent need for clear science and analysis on climate change, energy and low-carbon development.

Climate change is advancing quickly, and national strategies to mitigate it are lagging in some countries. This has prompted subnational jurisdictions – states, provinces, districts, counties and other political administrative units – to take action.

A report by CIFOR and partners took stock of efforts towards sustainable forest and land use by 39 subnational jurisdictions in 12 countries, which contain 28% of the world’s tropical forests. Despite scarce international climate finance, most had made measurable progress in developing policies and interventions to support their commitments to reducing deforestation. Thirty-five of them endorsed a set of guiding principles committing them to respecting the rights of forest peoples, when it came to their land and resources. And they’re not all going it alone: nearly half of the 39 jurisdictions are partnering with companies seeking sustainably grown supplies of agricultural commodities through consortia or multi-sector processes.

Yet the report authors found that only a few jurisdictions have well-advanced policy and legal reforms, plans and actions. They conclude that a global framework could help accelerate progress towards jurisdictional sustainability through shared definitions of success that enhance partnerships and recognize the efforts of aspiring jurisdictions.

This report is really useful because jurisdictions can share fundamental information about their progress with each other and partners. It also helps with planning and identifying gaps that require attention and management.”

Following the flows of REDD+ finance

A study led by the international consulting group COWI, along with the Öko-Institut and CIFOR scientists, looked at REDD+ funding to 41 countries between 2008–2015, to see where it’s going and how it’s being spent.

They found that donors are not necessarily allocating REDD+ funding to countries that are most likely to realize emission reductions, and that many are shifting their support to the third stage of REDD+ (results-based payment), despite the fact that some countries still need funding to get ‘REDD+ ready’ and to implement initiatives. There’s also a much greater emphasis on indirect funding, which supports a wide range of deforestation efforts than direct funding for REDD+ activities. And questions remain about the amount of private finance and where it is funneled.

How to navigate these challenges? The authors recommend diversifying funding sources – called blended finance – to cover the costs of REDD+ initiatives until they can generate the expected returns.

Does money go to trees?: Assessing finance flows to maximize the impact of REDD+

Consider gender dynamics from the outset for REDD+ success

The Global Comparative Study on REDD+ found that women are more likely to experience a decline in their perceived well-being when initiatives fail to effectively address gender in the design and implementation of initiatives. Based on focus group interviews starting in 2010, researchers assessed how men and women’s sense of well-being changed in REDD+ villages, compared with those in control sites.

The analysis points to the need for a clear understanding of gender dynamics and inequalities from the beginning, in order to address issues like women’s employment, economic conditions and empowerment throughout the duration of projects. 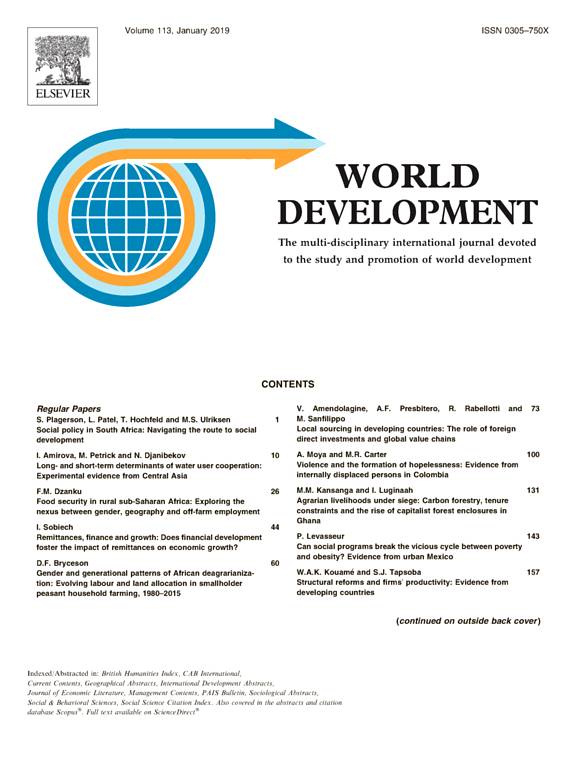 ID-RECCO – the first international database tool to comprehensively bring together information on hundreds of subnational REDD+ initiatives around the world – will continue to evolve under a new hosting agreement by CIFOR. Updates include the addition of subnational jurisdictional REDD+ programs, and a survey with project implementers to validate the data.

Climate change research … over the years

CIFOR has long worked to support policy-makers and practitioners in the fields of climate change mitigation and adaptation, bioenergy and low-carbon development, with the information, analysis and tools they need to design and implement sensible and efficient climate policies and practices. The following timeline highlights

Policy dialogue in collaboration with the International Academy of the Environment in Geneva to address issues associated with applying the ’Kyoto Principles’ to forests; new research launched on how the carbon trade could promote sustainable forestry

CIFOR ranked third among global think tanks in 2016, by the International Center for Climate Governance (ICCG) for 2016